Labels: family, placeholder
Was a tough year for the Judy and the boys as they had lost their husband and dad earlier in the year (March) and now had to survive this terrible storm.

Placeholder - will update
Posted by Paul at 1:00 am 0 comments 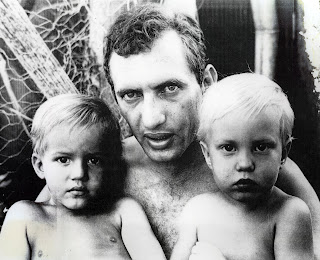 Ivan Maurice Thomsen died at the age of 35 on this day.

Ivan had been sick for a year or so with a condition the doctors described as "having the heart of an old man" although we're not sure what the proper term would be today.

Ivan had just been in hospital for a week in quite a serious condition and had been enjoying his time back home spending time with friends and family.

On Monday 25th of March he collapsed in the loungeroom at home and due to a blood clot affecting his brain (from a heart attack) never regained consciousness.  He was in a coma for 4 days when it was decided to switch his life support off on Thursday the 28th.

He left behind his young wife of 26 years of age and his two sons who were aged 5 and 4 at the time.  His daughter ShirleyAnne in Wyndham was nearly 9 years of age.

Ivan was the youngest of 5.  His older brothers Clyde and Wilson came up from Queensland for the funeral.  Paul and Craig didn't attend the funeral.  The funeral was held on the following day, Friday the 29th of March, and was conducted by the Rev D.G. McKenzie. 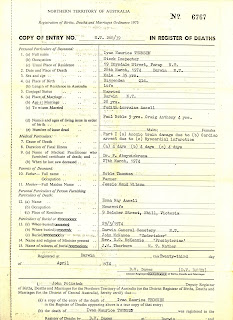 Labels: Paul, school
Paul started his schooling life at Parap Primay School this year.  His mum recalls a great photo that they had
of him and his bike with his Dad in the photo looking very proud - not sure if it exists anymore.

He had just turned 5 in the December prior.