Labels: camping, fishing, trip
Took the boats to baresand for the Darwin Show long weekend in 2002.    We left from Dundee and went north with 3 boats - Rob and Jessies big centre console "Megabite" and Baggsy brought his 16" dinghy that he bought off me (from memory Graham needed goggles and a snorkel on his trip and made a few comments about how wet the boat was when he arrived). 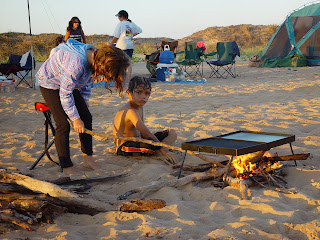 We were able to anchor the boats close to the beach and camp on the island.   From memory we caught a few fish but nothing spectacular.  The highlight of the trip was when a turtle crawled up on the beach just after dinner time and starting digging a nest right next to us!   We all gathered around as it then started to lay its eggs - seemingly not worried about us.

The next morning the kids found little baby turtles going down the beach to the water (obviously not from the same nest!) and did their best to protect them from predators. 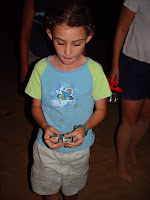 Another memory Paul has is waking up in the morning nearly covered by a dune and having a mouth full of sand!  Was a windy night and we were covered in sand.

Another notable event of the trip was Paul playing dead to attract a crocodile that was out in the channel - his ruse worked better than he expected as it immediately charged in towards him laying on the beach.  He did leave it to the last minute a bit to get up with Gwenny urgently shouting negative comments about his wisdom from up on the dune.

Robby then tried the same thing with a speargun in his hand but just as the croc got near him a boat came around the corner - surely he wasn't going to use it anyway! 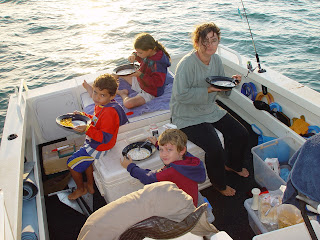 It was breakfast on the boat the next morning as the annoying wind had dropped and Paul was keen to get out as he reckoned he could smell mackerel in the air!

We got a few and it was very calm as you can see in the below photo (which incidentally features in this wikipedia article - http://en.wikipedia.org/wiki/Narrow-barred_Spanish_mackerel)
﻿
﻿ 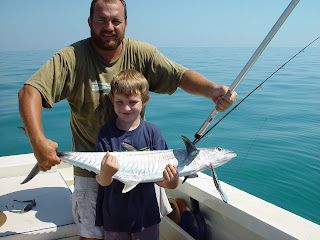 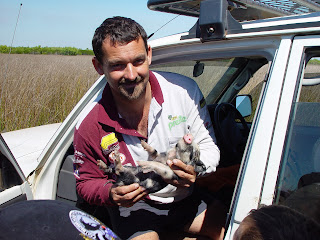 Camped for a couple of nights at Gun Point and had a really nice time with the family.

Apart from Graham catching a piglet, the only other memory of note was when Robby went for a drive and when we saw him walking back we knew something was wrong.

He had got bogged on a flat somewhere so my mighty Nissan Patrol had to pull him out - I made sure I got it on camera of course! 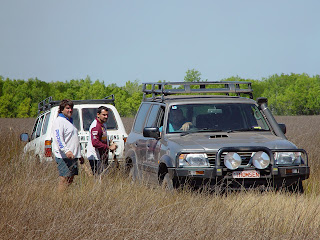 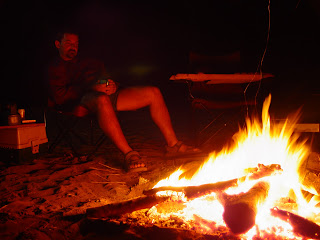