Paul and Craig rescued at sea! 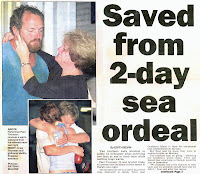 Well getting on the front page of the newspaper wasn't quite in Paul's plans!

A large family group were going to the Sandy Creek campsite in Arnhem Land near the Goulbourn Islands and Paul thought he'd take the boat around the coast by sea instead of drive like the other "land lubbers".  Seemed like a good idea at the time!

Paul and Craig set off just after lunch on Sunday the 6th of July, 2003.  They launched from the Nightcliff boat ramp and had a rough trip into the chop north where they reached the sheltered Trepang Bay on Coburg Peninsula to camp the night in the boat. 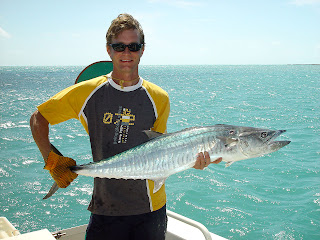 The next day the going was pretty slow as they had strong easterlies against them and a nasty chop.  Paul knew the weather wasn't going to be great but the strong wind warning that eventuated wasn't forecast initially.   By Tuesday night they reached Point David which is at the southern tip of Croker Island.  The Oyster Farm there had a little jetty and the workers were very hospitable allowing them to tie up for the jetty for the night.  They also had diesel they would sell so Paul took the opportunity to fuel up - he had enough but had used more than planned with the very poor conditions.

Wednesday morning they set off into a very stiff easterly pretty concerned about the weather.  Once they got into Mountnorris Bay a bit they could enjoy the scenery as the eastern part afforded good protection from the wind.  There was a huge school of big prawns and they got a few fish trawling through them.  They didn't stop to fish though as they wanted to get to their destination.  The rest of them were due to arrive at the mainland camping spot the following morning (Thursday July 10th).

When they came out of Malay Bay and started rounding Cape Cockburn they were confronted with huge standing waves.  Paul desparately wanted to turn back to the sheltered bay they had just exited but didn't feel he could safely ride the waves unless he kept boat's bow straight into them. 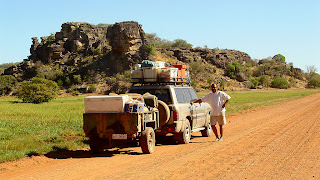 They inched along taking each of the waves wondering if the boat would be inundated or tossed backwards.  An engine failure would be catastrophic.   After a long time Paul was able to direct the boat in close to the eastern end of the cape, De Courcy Head, where there was some little shelter at the base of the huge cliffs.

They sat there for a few hours through the afternoon - trying to get out a few times but each time turning back as the waves had not lessened out wider.   They wandered about trying to get into the beach with supplies and camping there for the night but eventually decided to set the epirb off and get rescued.  The winds where turning more northerly and their little bit of shelter wasn't guaranteed through the night.

Well the rest is history - there was newspapers and tv crews waiting for them back in Darwin when they landed in the helicopter - as well as some very worried and then relieved family!

Paul and Gwenny was able to still drive out a couple of days later and join everyone else there as planned.  Fortunately Robby was able to take his boat up on the Friday (11/7/03) and find the boat - which was unfortunatly laying on its side in the fairly gentle surf by then.  But he did retrieve a lot of valuable gear from boat.

They all drove back home on Sunday the 13th of July.

Paul's insurance company was very helpful and salvaged the boat and repaired it - including a brand new engine etc.
﻿
Posted by Paul at 7:00 pm 0 comments