The end of Paul's BMX career

Labels: Paul, sport
In around November 1983 Paul had his BMX bike stolen from Nightcliff High School.  He had been slack and didn't even bother locking it up!

He really hadn't been that serious about his BMX in the last few months and never really got back to his top form after breaking his arm.   When he lost his bike then it was all over.  He recalls getting driven past a place by some policemen who wanted him to see if he recognised his bike in their yard - he didn't.

Some of the highlights of his career were;

John and Graham return to Darwin

Labels: craig, Paul
Paul and Craig's best mates who are also brothers returned to Darwin in October 1983.   They had been living in Alice Springs and Melbourne for a few years.  They left Darwin in January 1980.

They were keen on fishing when they returned and got Paul and Craig to become keen anglers also.  They lived in Woods St in Darwin City.  Previously they had lived at Wanguri when Paul and Craig first became friends with them (they all went to Wanguri Primary School and met there).

Labels: Paul, sport
Paul didn't have a great preparation for these titles as he virtually hadn't ridden his bike for a few months as he broke his arm around the May of that year.  This was at the new track in Leanyer as the Tracy Village track had been closed.

He was used to being in the top few riders and he struggled to make the final race for his 14 year age group.  He was lucky and just scraped in.

He recalls waiting in line on the starting hill behind the 13s and hearing some of the boys talking about who might win the 14s - and he was a bit shocked that his name wasn't mentioned!  Although it was fair enough really as he had shown pretty poor form.  It did however strengthen his resolve to have a really good crack at it.

He reckons he got the best start in his life and that he may have even been almost a full bike length by the time he got to the bottom of the starting hill.  The crowd was pretty shocked as Paul led all the favourites by quite a space around the first berm and over the tabletop jump.  Paul recalls never hitting the table top so fast and flying so far he landed on the flat track on the other side of the jump.

Rounding the next left handed low berm he simply went off the top of it and off the track.  When he got back on all the leaders had whizzed past and he just had nothing left to catch them up.  He thought at the time he went off because he was going so fast - but in hindsight he thinks it would have been a combination of that and the fact that he wasn't as fit and had nothing left and this would've contributed losing control also.  He was amazed how weak and wobbly his legs where when trying to keep up with the stragglers when he got back on the track.

From memory Craig did ok and reached the finals of his 13s age group and finished higher than Paul did in the end - perhaps 6th.  Whereas Paul was disqualified for cutting off one of the last riders when re-entering the track and was given 8th.

Labels: health, Paul, sport
Around May 1993 Paul broke his arm when mucking around with his friends riding his BMX bike at the Tracy Village Sports Club.

His chain broke and he went over the handle bars onto his outstretched hands onto the concrete.  It wasn't a serious break as he didn't know that it had a break until later that night.  He dropped a dish when doing the dishes later so his mum thought it'd be best to get his arm checked and an xray at the hospital revealed a hairline fracture on his forearm near his wrist. 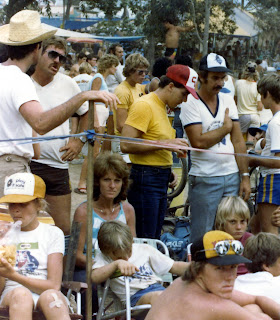