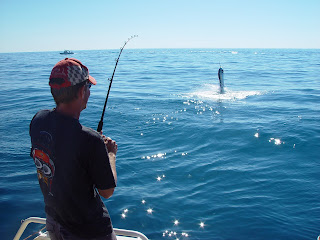 We left from Darwin on Saturday morning the 7th of August 2004 to Broome.

Craig, Matthew Possingham and Tim Ezzy went along with me.   Rob came along with Jessie, Kylie, Rochelle and a friend (the "tiler" - can't remember his name).  I think the tiler used his car to tow Rob's boat as it was a big F250 or something and could handle the heavy boat better.

We camped along the road saturday night at some truck stop near Halls Creek I think. 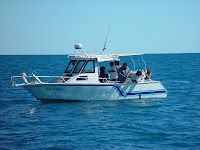 We got to Broome Sunday evening with no dramas and booked into the hotel.  I think we slept on the lounge room floor of the hotel Rob and Jessie booked!

We knew it was a good fishing spot when Craig got spooled by a Tuna just at the boat ramp whilst we were bobbing around waiting for Robby to launch before we headed out!

The first day (Monday) was a little bit rough so we didn't go right out wide to the Sailfish grounds but tried a few closer reefs for mackerel etc - and we didn't do too bad. 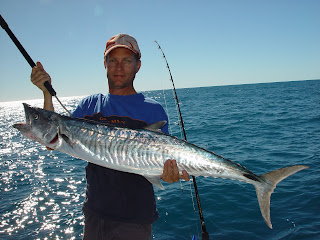 The tuesday was nice and calm so we headed straight out to the sailfish grounds.  It was awesome fishing, calm waters, abundant bait and sailfish free jumping everywhere!

Robs boat got onto a sail first and boated a nice big one and then Craig got one soon after.  About mid morning however disaster struck!   Rob's boat had its gearbox jammed and couldn't change gear.

Because we wanted to give him the best chance to get it fixed so he could return the next day we decided to tow it back in.  It was pretty tough leaving such awesome conditions.   After getting back to Broome Rob unfortunately had to call of the trip as all the boat mechanics were busy etc. 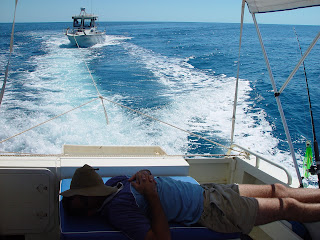 Well fortunately the next day and the rest of the week was just as good.  Calm blue water and acres of pilchards with hungry Sailfish herding them up.   We must have raised literally dozens of sails and hooked a lot of these - albeit to lose them before getting them in the boat.

Tim ended up getting his on the Thursday and Paul didn't get one until the Friday.  We tried for Matty Possingham but he unfortunately didn't get one.  He did catch some nice other fish however and he fought some big fish on the last afternoon that we'll never know the identity of.
We drove home Saturday morning non-stop to Darwin - which in hindsight was a bit foolish as Paul was very tired getting home around 4am Sunday morning.  Tim drove for a bit but Paul should've shared the driving more! 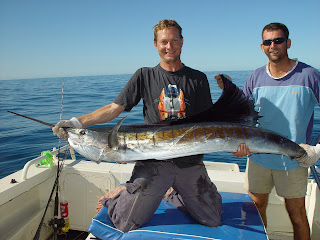 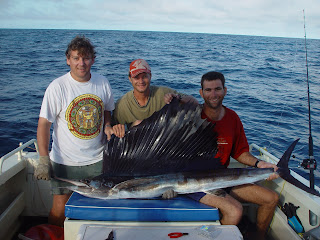 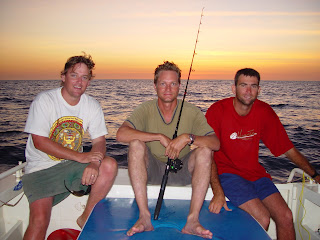